How to Play Sudoku

In Sudoku, your goal is to fill out the 9x9 grid such that numbers 1 to 9 are used only once horizontally, vertically, and within each individual 3x3 grid. Numbers arranged randomly to start, in this manner, provide clues towards figuring out where specific numbers should be placed.

To start playing, after choosing a level of difficulty above, simply click a blank space within the grid and insert a number using your keyboard.

Under the 9x9 grid, you will find a few blue buttons. These buttons allow change up your solving experience and in some cases provide solutions to the puzzle at hand. A detailed explanation follows:

Puzzles on this site are free to play and, in many cases, print. Support comes from people like yourself donating to the site and purchasing books.

Probably the easiest way to start solving your sudoku puzzle is to use the "One Rule," whereby there are some cells where only one number can possibly fit in.

Because numbers 1 through 9 neesd to be used within each 3x3 block, if there is only one cell within a block that is empty, this cell needs to contain that missing number.

Using the pencil tool, you can begin listing numbers that are possible for cells. Doing this, you will sometimes find cells that can only contain number.

In some blocks, you may find that there is a number that can only exist in specific positions within a row or column. It can be assumed that this number cannot consequently exist within other blocks within that row or column.

In a similar fashion, it is possible to use rows and columns of the same number to rule out numbers that might exist within these pairs, triplets, and quadruplets.

Some people will make print versions of their puzzles and use various marking systems to systematically show where they are within solving a sudoku puzzle. If working on a puzzle digitally is still a bit difficult, creating a print version might help.

Learn these strategies and you will be able to solve sudoku puzzles more easily.

Sudoku is an addicting game meaning single number. It has its origins in France, where the numbers 1 to 9 were used to add up to a total outside of the blank grid. In 1984, it was introduced to Japan, resembling its more modern form. Sudoku has since become a popular puzzle game, featured in many newpapers and periodicals around the world.

The simplicity of the structure, and yet depth of playability, has allowed sudoku to become the subject of many tournaments, game shows, and platforms. It has also spawned a whole series of variants including many that you can play on this site. 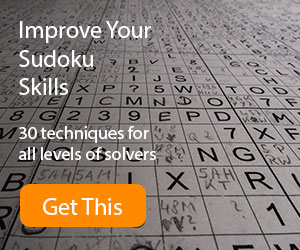